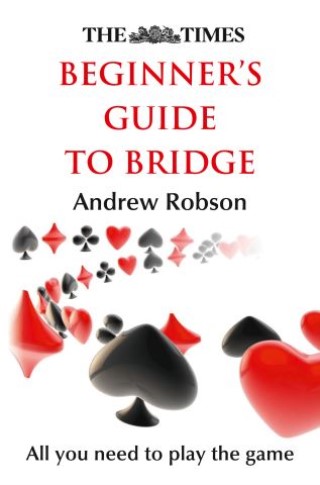 The Times Beginner’s Guide to Bridge: A practical guide on how to play and master bridge

A one-stop practical guide on how to play and master the fascinating game of bridge with expert advice throughout from Andrew Robson, the Times bridge correspondent and the world’s most famous and successful player and teacher of bridge.
Previously published in print as Collins Need to Know? Bridge. Now with additional practice deals.

Andrew Robson, the Times bridge correspondent, shows you how to play bridge – starting from the basics and taking you through the learning process step-by-step. Using clear illustrations and accompanying text, Andrew gives the reader a complete course in learning the game, including sample hands and ways to practice.

You’ll also learn about bidding, tricks, scoring and dealing, and etiquette whilst playing. Above all you’ll begin to develop the skills you need to play bridge, and win – including ingenuity, working well in a partnership, and a good memory.

Contents include: basic bidding and card-play strategies; etiquette and how to score; examples and practice tips; different types of bridge; conventions; evaluating a bridge hand.

Andrew Robson is widely regarded as Britain’s number one bridge player-teacher. He has won countless international bridge events beginning in 1989 with the World Junior Championships and including, in 1991, the European Championships. He is perhaps best known as the Times Bridge Correspondent.

Andrew Robson is Britain's leading bridge player, teacher, and writer. He is most widely known for his daily column in The Times which he began in 2000, and particularly for his Friday column for the less experienced, on which this book is based.Andrew has written weekly for Country Life since 1994 and for Money Week since 2005. He has also written for The Oldie, The Spectator, and the Express on Sunday.As a player Andrew has won the World Junior Championship, the European Championship and every top domestic event several times. Most recently he was one of the spearheads of the England team that reached the quarter-finals of the 2013 World Championships in Bali.As a teacher he runs the Andrew Robson Bridge Club which he started from nothing in 1995, now boasting over 2000 members and specialising in teaching the game to new players. He also travels the country giving Master Classes and leading Charity Bridge Days. For more about Andrew and his Club see www.andrewrobson.co.uk.Andrew, 51, lives in West London with his wife and two daughters. When not bridging he likes to ride his mountain bike.