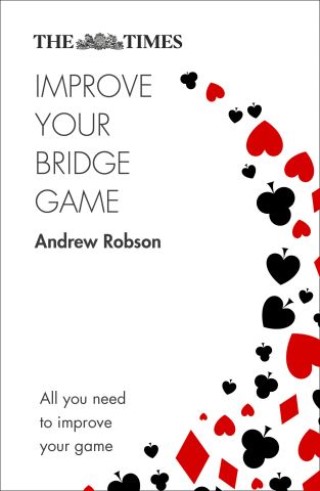 The Times Improve Your Bridge Game: A practical guide on how to improve at bridge

Based on The Times Bridge column, an extensive bridge guide aimed at the less experienced or social player who longs to improve their game, with instructive deals and tips, as well as a helpful Index.

Andrew Robson, The Times Bridge Correspondent, is both a champion Bridge player and an inspired teacher. He teaches and tutors at his Bridge Club and has acquired great practical knowledge about how people learn to play Bridge.

Based on Andrew Robson’s daily column in The Times, common scenarios are presented with an outline of what actually happened, as well as what should have happened. Along with every deal is the very popular handy tip ‘If you remember just one thing…’, which features throughout the book.

The first section of the book, ‘The Game’, is a basic outline providing the key to playing a sensible game of Bridge, subdivided into ‘Bidding’, ‘Declarer Play’ and ‘Defence’.

The reader can either read ‘The Game’ first, paying particular attention to the tips, or they can dip in and out of the book, picking a common mistake at random, with the option to cross-reference to the same tip in ‘The Game’ section.

Bridge is now reaching a new audience, and is being played by people of all ages. Let Andrew Robson help you to improve your game!

Previously published in 2005 as The Times Bridge: Common Mistakes and How to Avoid Them

Andrew Robson is widely regarded as Britain’s number one bridge player-teacher. He has won countless international bridge events beginning in 1989 with the World Junior Championships and including, in 1991, the European Championships. He is perhaps best known as the Times Bridge Correspondent.