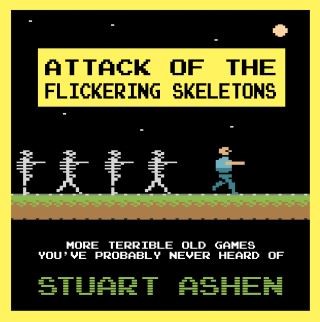 Attack of the Flickering Skeletons

Welcome to a world of games you never knew existed. You will probably wish you still didn’t.

YouTube sensation Stuart Ashen is back with his second instalment of terrible old computer games you’ve probably never heard of... because what the world needs right now is to know exactly how bad Domain of the Undead for the Atari 8-bit computers was.

Attack of the Flickering Skeletons is even bigger than the original Terrible Old Games You’ve Probably Never Heard Of – this second excavation of gaming’s buried past will not only unearth more appalling excuses for digital entertainment, but also feature guest contributors and several special interest chapters not based around single specific games.

These are NOT the games you’ve heard of a million times in YouTube videos. This is a compilation of truly obscure and dreadful games. Dripping with wry humour and featuring the best, worst graphics from the games themselves, this book encapsulates the atrocities produced in the days of tight budgets and low quality controls.

These are even more appalling games that leaked from the industry’s tear ducts, taken down from the dusty shelves of history by the man who has somehow made a living by sticking rubbish on a sofa and talking about it.

Stuart Ashen: Stuart Ashen makes videos for YouTube in which he reviews the best of the worst tat that the world has to offer. Producing hundreds of videos over the last fourteen years, he has garnered close to 500 million views and 1.5 million subscribers. Beyond YouTube, he makes films (most recently Ashens and the Polybius Heist), writes comedy scripts, and occasionally acts. youtube.com/user/ashens @ashens