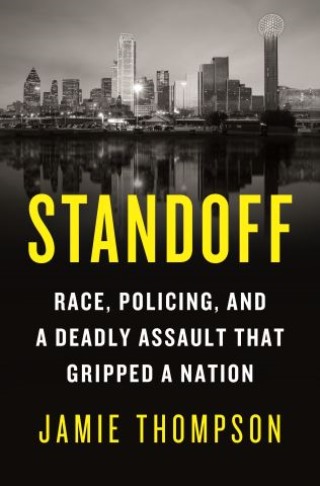 Race, Policing, and a Deadly Assault That Gripped a Nation

Standoff is award-winning journalist Jamie Thompson's gripping account of a deadly night in Dallas, told through the eyes of those at the center of the events, who offer a nuanced look at race and policing in America

On the evening of July 7, 2016, protesters gathered in cities across the nation after police shot two black men, Philando Castile and Alton Sterling. As officers patrolled a march in Dallas, a young man stepped out of an SUV wearing a bulletproof vest and carrying a high-powered rifle. He killed five officers and wounded eleven others.

It fell to a small group of cops to corner the shooter inside a community college, where a fierce gun battle was followed by a stalemate. Crisis negotiator Larry Gordon, a 21-year department veteran, spent hours bonding with the gunman—over childhood ghosts and death and shared experiences of racial injustice in America—while his colleagues devised an unprecedented plan to bring the night to its dramatic end.

Thompson’s minute-by-minute account includes intimate portrayals of the negotiator, a surgeon who operated on the fallen officers, a mother of four shot down in the street, and the SWAT officers tasked with stopping the gunman. This is a deeply affecting story of real people navigating a terrifying crisis and a city's attempts to heal its divisions.

Jamie Thompson: Jamie Thompson covered the Dallas police shooting for The Washington Post. Her later account of that night for The Dallas Morning News won an Edward R. Murrow Award for excellence in writing. She has been a contributing editor for D Magazine and an associate professor of journalism at the University of Dallas. Her work also has appeared in Texas Monthly and the Tampa Bay Times.