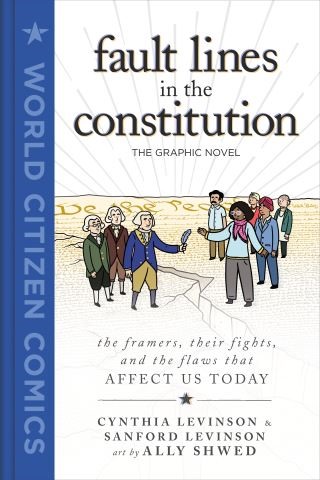 Fault Lines in the Constitution: The Graphic Novel

In 1787, after 116 days of heated debates and bitter arguments, the United States Constitution was created. This imperfect document set forth America’s guiding principles, but it would also introduce some of today's most contentious political issues—from gerrymandering, to the Electoral College, to presidential impeachment.

With colorful art, compelling discourse, and true stories from America's past and present, Fault Lines in the Constitution: The Graphic Novel sheds light on how today's political struggles have their origins in the decisions of our Founding Fathers.

Cynthia Levinson writes award-winning nonfiction books about social justice for young readers, including The Youngest Marcher and Watch out for Flying Kids. She also braids bread with six strands, juggles up to two balls, and takes a constitutional most days.

Cynthia and Sanford Levinson, with whom she co-authored Fault Lines in the Constitution: The Graphic Novel, have four thoroughly splendid grandchildren and divide their time between Austin, Texas and Boston, Massachusetts.

Sanford Levinson is a professor both at the University of Texas Law School and the University of Texas at Austin Department of Government. The author of many books on the U.S. Constitution and other subjects, he is a member of the American Academy of Arts and Sciences and received the lifetime achievement award of the Law and Courts Section of the American Political Science Association in 2010.

Sanford and Cynthia Levinson, with whom he co-authored Fault Lines in the Constitution: The Graphic Novel, have four thoroughly splendid grandchildren and divide their time between Austin, Texas and Boston, Massachusetts.