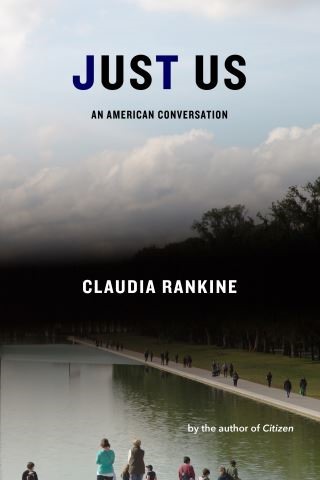 As everyday white supremacy becomes increasingly vocalized with no clear answers at hand, how best might we approach one another? Claudia Rankine, without telling us what to do, urges us to begin the discussions that might open pathways through this divisive and stuck moment in American history.

Just Us is an invitation to discover what it takes to stay in the room together, even and especially in breaching the silence, guilt, and violence that follow direct addresses of whiteness. Rankine’s questions disrupt the false comfort of our culture’s liminal and private spaces—the airport, the theater, the dinner party, the voting booth—where neutrality and politeness live on the surface of differing commitments, beliefs, and prejudices as our public and private lives intersect.

This brilliant arrangement of essays, poems, and images includes the voices and rebuttals of others: white men in first class responding to, and with, their white male privilege; a friend’s explanation of her infuriating behavior at a play; and women confronting the political currency of dying their hair blond, all running alongside fact-checked notes and commentary that complements Rankine’s own text, complicating notions of authority and who gets the last word.

Sometimes wry, often vulnerable, and always prescient, Just Us is Rankine’s most intimate work, less interested in being right than in being true, being together.

Claudia Rankine: Claudia Rankine is the author of Citizen: An American Lyric and four previous books, including Don’t Let Me Be Lonely: An American Lyric. Her work has appeared recently in the Guardian, the New York Times Book Review, the New York Times Magazine, and the Washington Post. She is a chancellor of the Academy of American Poets, the winner of the 2014 Jackson Poetry Prize, and a contributing editor of Poets & Writers. She received a MacArthur Fellowship in 2016. Rankine is the Frederick Iseman Professor of Poetry at Yale University.