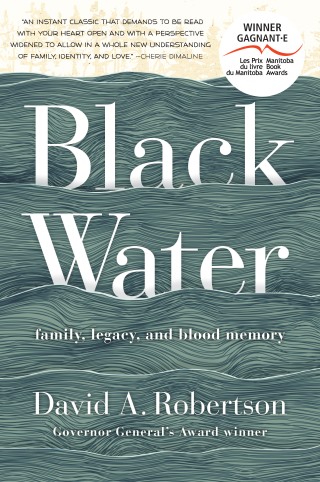 “An instant classic that demands to be read with your heart open and with a perspective widened to allow in a whole new understanding of family, identity, and love.” —Cherie Dimaline

A son who grew up away from his Indigenous culture takes his Cree father on a trip to their family's trapline, and finds that revisiting the past not only heals old wounds but creates a new future.

The son of a Cree father and a non-Indigenous mother, David A. Robertson was raised with virtually no knowledge or understanding of his family’s Indigenous roots. His father, Don, spent his early childhood on a  trapline in the bush northeast of Norway House, Manitoba, where his first teach was the land. When his family was moved permanently to a nearby reserve, Don was not permitted to speak Cree at school unless in secret with his friends and lost the knowledge he had been gifted while living on his trapline. His mother, Beverly, grew up in a small Manitoba town with not a single Indigenous family in it. Then Don arrived, the new United Church minister, and they fell in love.

Structured around a father-son journey to the northern trapline where Robertson and his father will reclaim their connection to the land, Black Water is the story of another journey: a young man seeking to understand his father's story, to come to terms with his lifelong experience with anxiety, and to finally piece together his own blood memory, the parts of his identity that are woven into the fabric of his DNA.

DAVID A. ROBERTSON is the winner of the Governor General’s Literary Award, the Beatrice Mosionier Indigenous Writer of the Year Award and the John Hirsch Award for Most Promising Manitoba Writer. His books include When We Were Alone (winner of the Governor General’s Award, a finalist for the TD Canadian Children’s Literature Award and a McNally Robinson Best Book for Young People); Will I See? (winner of the Manuela Dias Book Design and Illustration Award, Graphic Novel category); the YA novel Strangers (recipient of the Michael Van Rooy Award for Genre Fiction); and Monsters (a McNally Robinson Best Book for Young People). Through his writings about Canada’s Indigenous Peoples, Robertson educates as well as entertains, reflecting Indigenous cultures, histories and communities while illuminating many contemporary issues. David A. Robertson is a member of Norway House Cree Nation. He lives in Winnipeg.