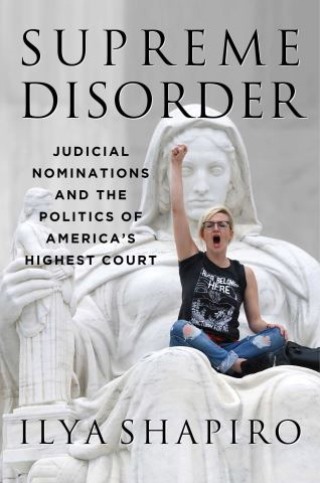 Judicial Nominations and the Politics of America's Highest Court

Politics have always intruded on Supreme Court appointments. But although the Framers would recognize the way justices are nominated and confirmed today, something is different. Why have appointments to the high court become one of the most explosive features of our system of government?

As Ilya Shapiro makes clear in Supreme Disorder, this problem is part of a larger phenomenon. As government has grown, its laws reaching even further into our lives, the courts that interpret those laws have become enormously powerful. If we fight over each new appointment as though everything were at stake, it’s because it is.

When decades of constitutional corruption have left us subject to an all-powerful tribunal, passions are sure to flare on the infrequent occasions when the political system has an opportunity to shape it. And so we find the process of judicial appointments verging on dysfunction.

Shapiro weighs the many proposals for reform, from the modest (term limits) to the radical (court-packing), but shows that there can be no quick fix for a judicial system suffering a crisis of legitimacy. And in the end, the only measure of the Court’s legitimacy that matters is the extent to which it maintains, or rebalances, our constitutional order.

Ilya Shapiro: Ilya Shapiro is the director of the Robert A. Levy Center for Constitutional Studies at the Cato Institute. Before joining Cato, he was a special assistant/adviser to the Multi-National Force in Iraq on rule-of-law issues and practiced at Patton Boggs and Cleary Gottlieb. Shapiro is the co-author of Religious Liberties for Corporations? Hobby Lobby, the Affordable Care Act, and the Constitution (2014), and editor of 11 volumes of the Cato Supreme Court Review (2008-18). He has contributed to a variety of academic, popular, and professional publications, including the Wall Street Journal, Harvard Journal of Law & Public Policy, Washington Post, Los Angeles Times, USA Today, National Review, and New York Times Online. He also regularly provides commentary for various media outlets, including CNN, Fox News, ABC, CBS, NBC, Univision and Telemundo, the Colbert Report, PBS NewsHour, and NPR. Shapiro has testified before Congress and state legislatures and has filed more than 300 amicus curiae “friend of the court” briefs in the Supreme Court. He lectures regularly on behalf of the Federalist Society, was an inaugural Washington Fellow at the National Review Institute and a Lincoln Fellow at the Claremont Institute, and has been an adjunct professor at the George Washington University Law School. He is also the chairman of the board of advisors of the Mississippi Justice Institute, and a member of the Virginia Advisory Committee to the U.S. Commission on Civil Rights. In 2015, National Law Journalnamed him to its 40 under 40 list of “rising stars.” Before entering private practice, Shapiro clerked for Judge E. Grady Jolly of the U.S. Court of Appeals for the Fifth Circuit. He holds an AB from Princeton University, an MSc from the London School of Economics, and a JD from the University of Chicago Law School (where he became a Tony Patiño Fellow). He lives in northern Virginia.