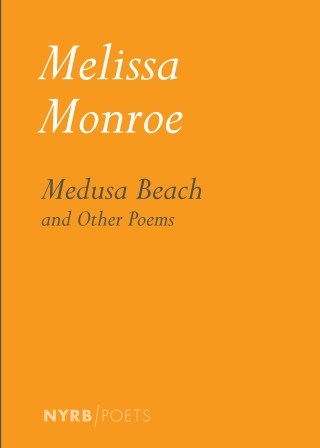 A new collection from one of the most exciting voices in American poetry.

For many years, Melissa Monroe has been assembling one of the most distinctive bodies of work in contemporary American poetry, drawing on all different kinds of writing, from technical manuals to books of spells to dictionaries of slang, to explore the many ways—poetry is, after all, one of them—in which we human beings seek to know and control the elusive realities of the world around and within us. Her subject is both the strangeness of things and the strangeness of the things we think, and she has an unsurpassed eye for the wilderness between them that we inhabit. The poems collected in Medusa Beach include “Planetogenesis,” recording the life of an imaginary planet; “Whiz Mob,” a sequence of haikus composed in the criminal argot of 1940s America; “Frequently Asked Questions About Spirit Photography”; and the title poem, which interweaves an account of the life and thought of the great German philosopher and marine biologist Ernst Haeckel with a meditation on the many historical and natural historical avatars of the figure of Medusa. As formally adventurous as they are rigorous, disconcertingly comic, and deeply strange, the poems in Medusa Beach are the work of a true American original.

Melissa Monroe: Melissa Monroe teaches at the New School for Social Research in New York. Her previous volume of poetry, Machine Language, was published by Alef Books in 1997, and an extended essay in verse, On Trepanation and Human Nature: Perspectives from Paul Broca to the Present, was published by Smith+Brown in 2014.