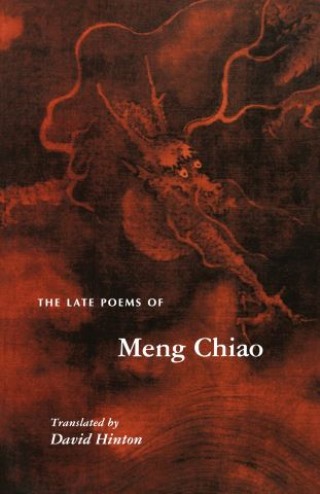 The Late Poems of Meng Chiao

Late in life, Meng Chiao (A.D. 751--814) developed an experimental poetry of virtuosic beauty, a poetry that anticipated landmark developments in the modern Western tradition by a millennium. With the T'ang Dynasty crumbling, Meng's later work employed surrealist and symbolist techniques as it turned to a deep introspection. This is truly major work-- work that may be the most radical in the Chinese tradition. And though written more than a thousand years ago, it is remarkably fresh and contemporary. But, in spite of Meng's significance, this is the first volume of his poetry to appear in English.


Until the age of forty, Meng Chiao lived as a poet-recluse associated with Ch'an (Zen) poet-monks in south China. He then embarked on a rather unsuccessful career as a government official. Throughout this time, his poetry was decidedly mediocre, conventional verse inevitably undone by his penchant for the strange and surprising. After his retirement, Meng developed the innovative poetry translated in this book. His late work is singular not only for its bleak introspection and "avant-garde" methods, but also for its dimensions: in a tradition typified by the short lyric poem, this work is made up entirely of large poetic sequences.

Meng Chiao: David Hinton has translated six volumes of Chinese poetry, including The Selected Poems of Tu Fu and The Selected Poems of Li Po. He has earned wide critical acclaim for creating compelling English poems that alter our conception of Chinese poetry. By translating such an unusual body of work, he adds dramatic new breadth to the Chinese tradition in English.