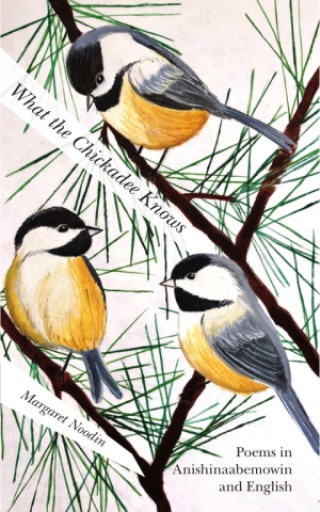 What the Chickadee Knows

Margaret Noodin explains in the preface of her new poetry collection, What the Chickadee Knows (Gijigijigaaneshiinh Gikendaan), "Whether we hear giji-giji-gaane-shii-shii or chick-a-dee-dee-dee depends on how we have been taught to listen. Our world is shaped by the sounds around us and the filter we use to turn thoughts into words. The lines and images here were conceived first in Anishinaabemowin and then in English. They are an attempt to hear and describe the world according to an Anishinaabe paradigm." The book is concerned with nature, history, tradition, and relationships, and these poems illuminate the vital place of the author’s tribe both in the past and within the contemporary world. What the Chickadee Knows is a gesture toward a future that includes Anishinaabemowin and other indigenous languages seeing growth and revitalization. This bilingual collection includes Anishinaabemowin and English, with the poems mirroring one another on facing pages. In the first part, "What We Notice" (E-Maaminonendamang), Noodin introduces a series of seasonal poems that invoke Anishinaabe science and philosophy. The second part, "History" (Gaa Ezhiwebag), offers nuanced contemporary views of Anishinaabe history. The poems build in urgency, from observations of the natural world and human connection to poems centered in powerful grief and remembrance for events spanning from the Sandy Lake Tragedy of 1850, which resulted in the deaths of more than four hundred Ojibwe people, to the Standing Rock water crisis of 2016, which resulted in the prosecution of Native protesters and, ultimately, the completion of the Dakota Access Pipeline on sacred land. The intent of What the Chickadee Knows is to create a record of the contemporary Anishinaabe worldview as it is situated between the traditions of the past and as it contributes to the innovation needed for survival into the future. Readers of poetry with an interest in world languages and indigenous voices will need this book.

Margaret Noodin: Margaret Noodin is professor of English and American Indian studies at the University of Wisconsin–Milwaukee, where she also serves as the associate dean of the Humanities and director of the Electa Quinney Institute for American Indian Education. She is the author of Bawaajimo: A Dialect of Dreams in Anishinaabe Language and Literature and Weweni (Wayne State University Press, 2015), a collection of bilingual poems in Anishinaabemowin and English.