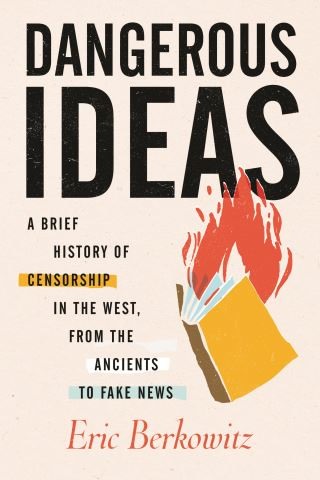 A Brief History of Censorship in the West, from the Ancients to Fake News

A fascinating examination of how restricting speech has continuously shaped our culture, and how censorship is used as a tool to prop up authorities and maintain class and gender disparities

Through compelling narrative, historian Eric Berkowitz reveals how drastically censorship has shaped our modern society. More than just a history of censorship, Dangerous Ideas illuminates the power of restricting speech; how it has defined states, ideas, and culture; and (despite how each of us would like to believe otherwise) how it is something we all participate in.

This engaging cultural history of censorship and thought suppression throughout the ages takes readers from the first Chinese emperor’s wholesale elimination of books, to Henry VIII’s decree of death for anyone who “imagined” his demise, and on to the attack on Charlie Hebdo and the volatile politics surrounding censorship of social media.

Highlighting the base impulses driving many famous acts of suppression, Berkowitz demonstrates the fragility of power and how every individual can act as both the suppressor and the suppressed.

Eric Berkowitz: Eric Berkowitz is a writer, lawyer, and journalist. For more than 20 years, he practiced intellectual property and business litigation law in Los Angeles. Berkowitz has published widely throughout his career, and his writing has appeared in periodicals such as the New York Times, the Washington Post, The Economist, the Los Angeles Times, and LA Weekly. His previous books include Sex and Punishment and The Boundaries of Desire. He lives in San Francisco.