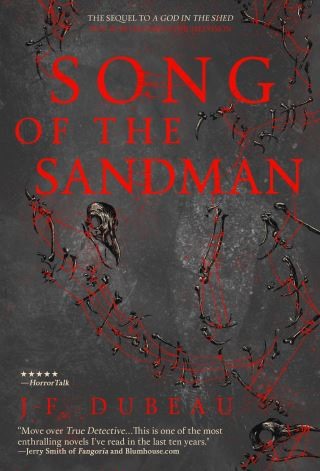 Song of the Sandman

After a terrible mass shooting at Cicero’s Circus, the evil presence responsible for the carnage is taken in by a doomsday cult lying in wait for such an opportunity.

The village struggles to get back to normal in the aftermath of the shooting. The massacre was the final straw for many inhabitants, triggering a mass exodus. Families left their homes without looking back, not even to find out what could have caused such a tragedy. However, to those who know the truth—that a malevolent god unleashed its wrath upon the village—it’s only a matter of time before events repeat themselves.

Venus McKenzie ventures deeper into the pit of secrets left in death’s wake, praying that what she’ll find will help her against the dark forces she couldn’t defeat before.

J-F. Dubeau: J-F. Dubeau is a Montreal native learning to cope with a crippling addiction to storytelling and long-form narrative. So far, writing seems to be the only treatment. His first book, the Dragon Award–nominated and Sword & Laser Contest–winning The Life Engineered, is an optimistic science-fiction tale of the future published by Sword & Laser (Inkshares). Song of the Sandman is the sequel to Dubeau’s award nominated horror novel, A God in the Shed.