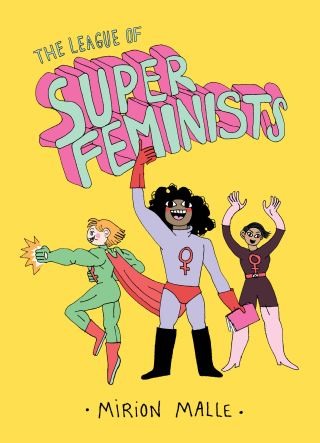 "This primer on feminism and media literacy teaches young readers why it matters The League of Super Feminists is an energetic and fierce comic for tweens and younger teens. Cartoonist Mirion Malle guides readers through some of the central tenets of feminism and media literacy including consent, intersectionality, privilege, body image, inclusivity and more; all demystified in the form of a witty, down-to-earth dialogue that encourages questioning the stories we're told about identity. Malle’s insightful and humorous comics transport lofty concepts from the ivory tower to the eternally safer space of open discussion. Making reference to the Bechdel test in film and Peggy McIntosh’s dissection of white privilege through the metaphor of the “invisible knapsack,” The League of Super Feminists is an asset to the classroom, library, and household alike. Knights and princesses present problems associated with consent; superheroes reveal problematic stereotypes associated with gender; and grumpy onlookers show just how insidious cat-calling culture can be. No matter how women dress, Malle explains, there seems to always be someone ready to call it out. The League of Super Feminists articulates with both poise and clarity how unconscious biases and problematic thought processes can have tragic results. Why does feminism matter? Are feminists man-haters? How do race and feminism intersect? Malle answers these questions for young readers, in a comic that is as playful and hilarious as it is necessary."