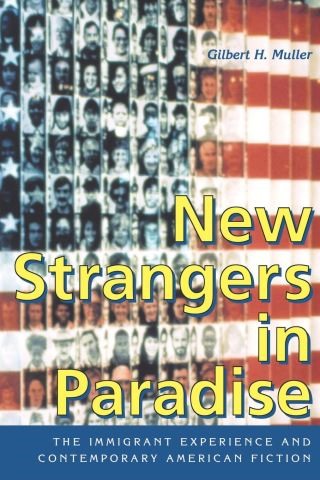 New Strangers in Paradise offers the first in-depth account of the ways in which contemporary American fiction has been shaped by the successive generations of immigrants to reach U.S. shores. Gilbert Muller reveals how the intersections of peoples, regions, and competing cultural histories have remade the American cultural landscape in the aftermath of World War II.

Muller focuses on the literature of Holocaust survivors, Chicanos, Latinos, African Caribbeans, and Asian Americans. In the quest for a new identity, each of these groups seeks the American dream and rewrites the story of what it means to be an American. New Strangers in Paradise explores the psychology of uprooted peoples and the relations of culture and power, addressing issues of race and ethnicity, multiculturalism and pluralism, and national and international conflicts.

Examining the groups of immigrants in the cultural and historical context both of America and of the lands from which they originated, Muller argues that this "fourth wave" of immigration has led to a creative flowering in modern fiction. The book offers a fresh perspective on the writings of Vladimir Nabokov, Sual Bellow, William Styron, Maxine Hong Kingston, Amy Tan, Oscar Hijuelos, Jamaica Kincaid, Bharati Mukherjee, Rudolfo Anaya, and many others.

Gilbert H. Muller: Gilbert H. Muller, professor of English and special assistant to the president at the LaGuardia campus of the City University of New York, is the author of numerous articles, textbooks, and critical studies, including Bridges: Literature Across Cultures.