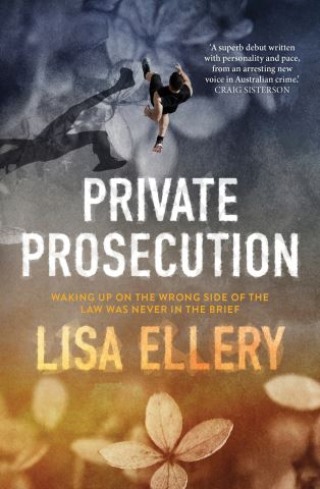 Andrew Deacon is young, fit, and single, a junior prosecutor at the WA DPP with a bright future and a sense of entitlement to match. That future starts to look darker when he spends the night with an attractive stranger, Lily Constantine, and she is found murdered in her apartment the following day. Based on a conversation with Lil, Andrew believes he knows who killed her—a senior criminal law barrister, Sam Godfrey SC, who is also Lil's brother-in-law. Andrew tells the police everything he knows, but his quest to bring Godfrey to justice provokes retaliation and soon Andrew is on the run, with no way forward but to prove Godfrey's guilt. This is a pacy, darkly comic whodunnit with a twist—Andrew knows who did it but the clock is ticking and he has to prove it before he gets himself taken out.

Lisa Ellery: Lisa Ellery was born in 1975 and raised on a farm near Esperance on Western Australia's south coast. She studied law and arts at the University of Western Australia before returning to regional WA in 1998 to commence her career as a lawyer in the goldmining city of Kalgoorlie-Boulder. She soon fell in love with Kal and its people, and in 2008 she started her own law firm there. She works predominantly in commercial and mining law and employs a dozen staff in her busy Hannan Street practice. Lisa is married to Simon Ellery, a geologist.