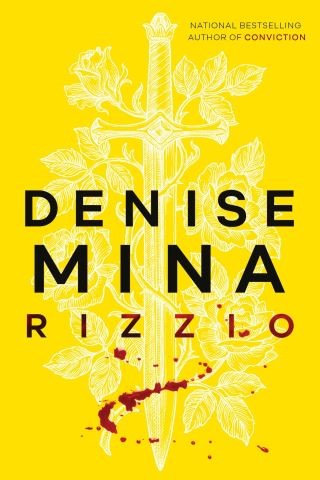 From the multi-award-winning master of crime, Denise Mina delivers a radical new take on one of the darkest episodes in Scottish history—the bloody assassination of David Rizzo  private secretary to Mary, Queen of Scots, in the queen’s chambers in Holyrood Palace.

On the evening of March 9th, 1566, David Rizzio, the private secretary of Mary, Queen of Scots, was brutally murdered. Dragged from the chamber of the heavily pregnant Mary, Rizzio was stabbed fifty six times by a party of assassins. This breathtakingly tense novella dramatises the events that led up to that night, telling the infamous story as it has never been told before.

A dark tale of sex, secrets and lies, Rizzio looks at a shocking historical murder through a modern lens—and explores the lengths that men and women will go to in their search for love and power.

Rizzio is nothing less than a provocative and thrilling new literary masterpiece.

Denise Mina: Denise Mina is the New York Times bestselling author of The End of the Wasp Season and Gods and Beasts. Her recent novel Conviction was a Reese Witherspoon Book Club Pick and a national bestseller She is a regular contributor on the subject of crime fiction for television and radio. Denise lives in Glasgow.